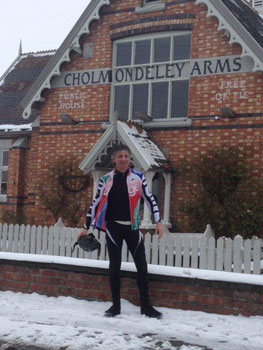 Loyal customer and very keen cyclist Jonathon is the first of our cycling customers to complete the ‘Cheshire Cat Pub to Pub to Pub (Trio) Challenge’.

Setting out from near Knutsford in pretty cold and snowy conditions Jonathon headed first to our Cholmondeley Arms Pub out near Malpas on the A49 heading to Whitchurch!! The picture shows just how snowy Cholmondeley was compared to the rest of the county. Having taken on a warm hot chocolate for energy, Jonathon then headed to our next pub the Three Greyhounds Inn at Allostock. Conditions here were much better for a cycling enthusiast. After another picture outside this pub it was on for the final leg of the journey to a rather misty Bulls Head before heading home for a hot shower and an early night. Just over 70 miles later without any performance enhancing drugs or a Steak and Ale Pie even!!! The respective pub teams gave Jonathon a warm welcome as well as helping with photo taking and ensuring he was back on his bike for the next leg of this journey!!

Jonathon commented “I was at a loss as to where to go on my Sunday ride today. So thought I would tackle that well known ride ‘The Cheshire Cat Trio’!! Cholmondley is a little further down the A49 than I thought and there was also more snow than I anticipated when I got there but I am thrilled to be the first of many to hopefully tackle the challenge!!”

Well done Jonathon a great effort and there is a Pie waiting at a pub of your choice from the trio as and when you have recovered!!!

If you are a keen cyclist and want to be listed as a ‘Cheshire Cat Trio Cycling Challenge beater’ then set out and ensure your photo is taken with your trusty bike at each pub with the signs in the background of each picture and send them to info@cheshirecatpubsandbars.co.uk. You will get your photo in our ‘hall of fame’ and we will send you a ‘refreshment voucher’ as well as a pint on us at the final pub!!

Thanks again to Jonathon for taking on the challenge and beating it!!! 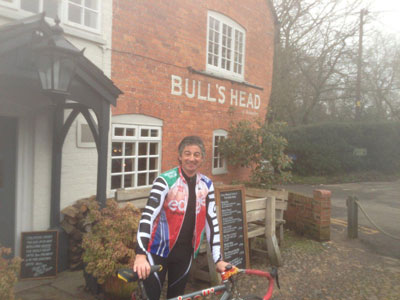 AT THE BULLS HEAD 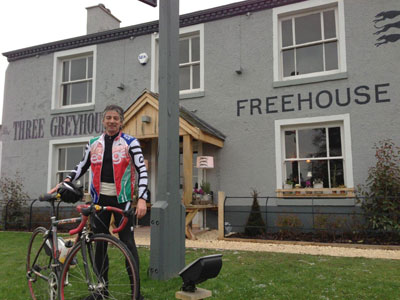 AT THE THREE GREYHOUNDS 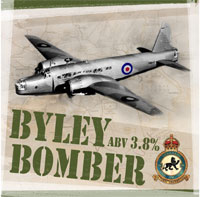 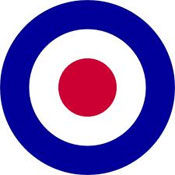 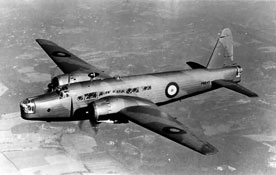 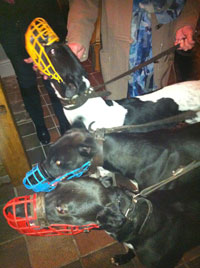 Opening night at the new Three Greyhounds Inn was celebrated with the arrival of the real three greyhounds…muzzles and all.

Our wonderful gardener and great raconteur from our Cholmondeley Arms pub, Johnny, popped in on opening night with his good lady wife and son. He brought along his three pet greyhounds to celebrate the re-opening of our historic country pub.

Customers and the team all came out to give the dogs a pat on the head.

We are delighted to be open and thank you to all who have visited us over the opening weekend and all the positive feedback we have received. 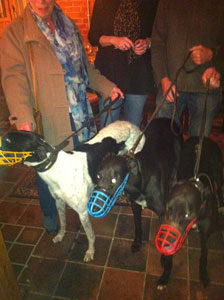 Somebody has to do it!! 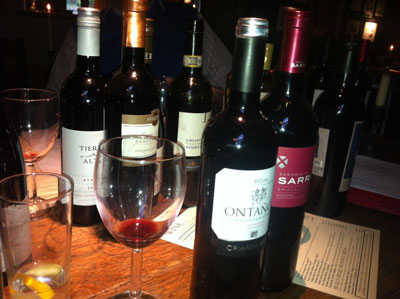 As you can see there was a lot of wine to look at for the new Three Greyhounds Inn wine list!!! Sitting on table 10 at our Bulls Head in Mobberley working with our wine supplier to decide the reds, whites and rose for the list.

For those who know us well the wines by the glass are the most important to us and we have selected some new wines in this area. Without giving too much away we will be pouring a beautiful Malbec by the glass which has an attachment with Jodrell Bank!!!

Anyway big thanks to Danny and Joe for bring great wines to the table.

We can’t wait to get started now!!! 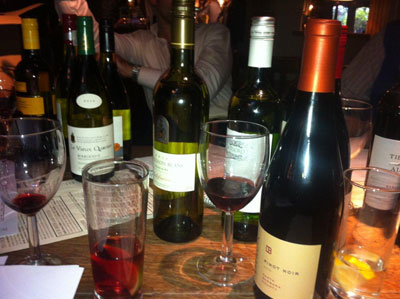 Yew Tree sadly has to be taken down. 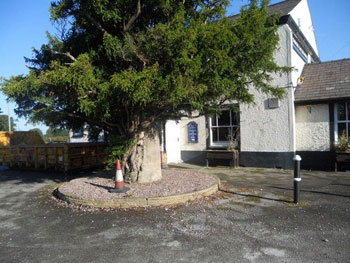 We are sorry to announce that the old Yew Tree at the front of the pub has had to be taken down. The roots of the tree are upsetting the foundations of the pub and in order for us to carry out the major restoration works needed to rescue this pub we have been given absolutely no choice.

The plan was to create a green in front of the pub with the tree as a center piece but sadly this was not possible. We will still be creating the little green and a new Yew Tree will be planted in the garden where the sun shines all day. The tree had also become an eyesore with huge amounts of cement around the trunk to stop growth and frankly was used as a rather large ashtray too!!!

As the work commenced on the tree parts of it were found to be dead behind the cement.

Sometimes changes have to be made for the better and the benefits are that the building won’t fall down and we have a lovely view of the famous ‘Three Greyhounds Inn’, a pub which had closed down. We are in the pub restoration business and the Three Greyhounds Inn will be restored beyond its former glory….a beautiful country pub, ‘local and proud. 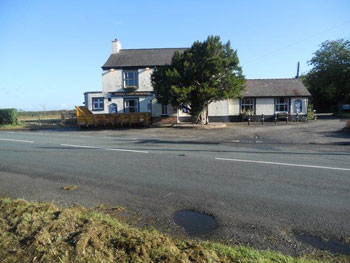