To all our customers, the Three Greyhounds Inn re-opened at the beginning of October 2012 following a change of ownership and significant restoration and refurbishment works.

We wish to point out that any reviews prior to this date do not relate to our wonderful pub nor do sites such as face book, twitter or ‘beer in the evening’.

If a customer has comments that will help us improve the service we offer please contact us directly at info@thethreegreyhoundsinn.co.uk as we do not acknowledge such websites as Trip advisor, ‘beer in the evening’ or other sites that can be sadly used maliciously, in an attempt to damage reputations.

Life is too short …so we would like you to contact us directly and we will help you in any way we can.

Please visit “contact us” from our website to email us any constructive comments you may have or indeed any queries…Below are some reviews. You can also keep up to date with upcoming events and exciting news by following @ThreeGreyhound on Twitter. 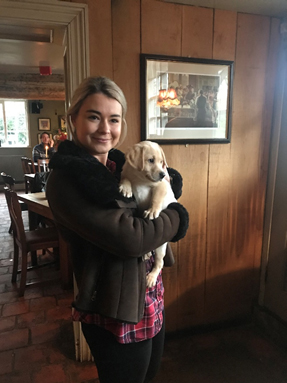 If you love having a dog, you probably love doing things that dogs love doing too – and a good walk is top of the list. We are lucky enough to live in a beautiful country, and not only that, a country that is criss-crossed with a network of public footpaths crying out to be explored. This wonderful access we are given to our countryside is one of the greatest privileges of living and holidaying in Britain. As dog owners, we naturally want to share the scenery with the company of a dog or two – or in my case, three. Yet often in the past it has been a challenge to find somewhere equally pleasurable to have a restorative drink – and perhaps a lovely meal as well – at the end of a stroll. I’m sure I’m not the only one of us who has ended up in a poky, lino-clad room tucked away down some dark corridor that describes itself as “dog friendly”. But there are plenty of civilised, dog-friendly pubs out there. The dedicated team at Sawday’s has travelled the length and breadth of Britain to find an enticing collection of places to eat and stay. And if, like me, you are eccentric and dotty enough want to bring your dog along too, you can. I call it the “tail-wagging” guide, and it has never failed me or my dogs yet..

THE THREE GREYHOUNDS
INN, HOLMES CHAPEL ROAD,
KNUTSFORD, CHESHIRE
WA16 9JY
This wonderfully renovated coaching inn is popular with families and dog walkers. Try a Cheshire cheese board with a warming cider brandy after a real walk around Shakerley Mere (right next to the pub). There is a dog’s dinner menu, doggy beer for sale and treats on the bar for well-behaved hounds, who can snuggle up or play in the large garden.

The Three Greyhounds Inn in Allostock has beaten off competition from 1300 other pubs to be named Best Food Pub in national awards run by Heineken owned Star Pubs & Bars this week.

Noting the pub’s busy car park, the judges were impressed by how quickly owners Tim Bird and Mary McLaughlin had established the pub as a great place to eat within just a year of re-opening. Describing it as a ‘shining light’, they also singled out the distinctive menu with its focus on food from British farms.

Indeed it was the opportunity to offer food at the Three Greyhounds Inn that attracted Tim and Mary to take on the pub and to invest £250,000 restoring it into a beautiful traditional pub serving excellent locally sourced food. “The pub had been shut for four months and was in a sad state when we first saw it,” recalls Tim. “But it had real character and as the only pub in the Allostock area was crying out for some TLC and to be turned back into a pub that the local community could be proud of.”

The 300-year-old pub’s history as a farm inspired Tim and Mary with the menu theme. The menu is a celebration of food from British farms with as much produce as possible from meat and vegetables to ice cream and chutney coming from Cheshire farms. For an added twist, the pub also specialises in British farm cheeses and offers a choice of eight brandies produced on a Somerset farm.

“We’ve been surprised and delighted by the variety of wonderful food being produced on Cheshire farms, from chocolate to asparagus, the quality is excellent,” says Tim.

The Three Greyhounds landlord James Griffiths received the coveted award at a gala celebration night from snooker champion John Parrott. “We’re humbled but very proud to have been selected to win the award. We didn’t seek the nomination which made winning a great surprise and a real boost for our 25 staff and 5 chefs. Some people think that rundown pubs are a lost cause, this award helps us prove there will always be a place for a well-cared for traditional community local.”

Tim and Mary are not resting on their laurels after their win, with plans for a private dining room, guest bedrooms and a regular farmers market at the Three Greyhounds Inn on the cards.

We want to send the most positive of comments to all the team at the Three Greyhounds Inn.

We visited on Tuesday 9th July having found the Shackerley Mere walk via an OS map with more detail on your website. Left the car in the pub car park and enjoyed the walk then returned for lunch.

Our welcome at the Three Greyhounds was very friendly. Your restoration of the building has been a great success with some interesting talking points, comfortable seating areas, small private corners but also a pleasant and open bar area – also a lovely garden seating spaces with very welcome shade.

The food menu gave a very wide choice and we really enjoyed the fish platter for sharing.

Service at the bar and with food was prompt and efficient. Prices very reasonable. 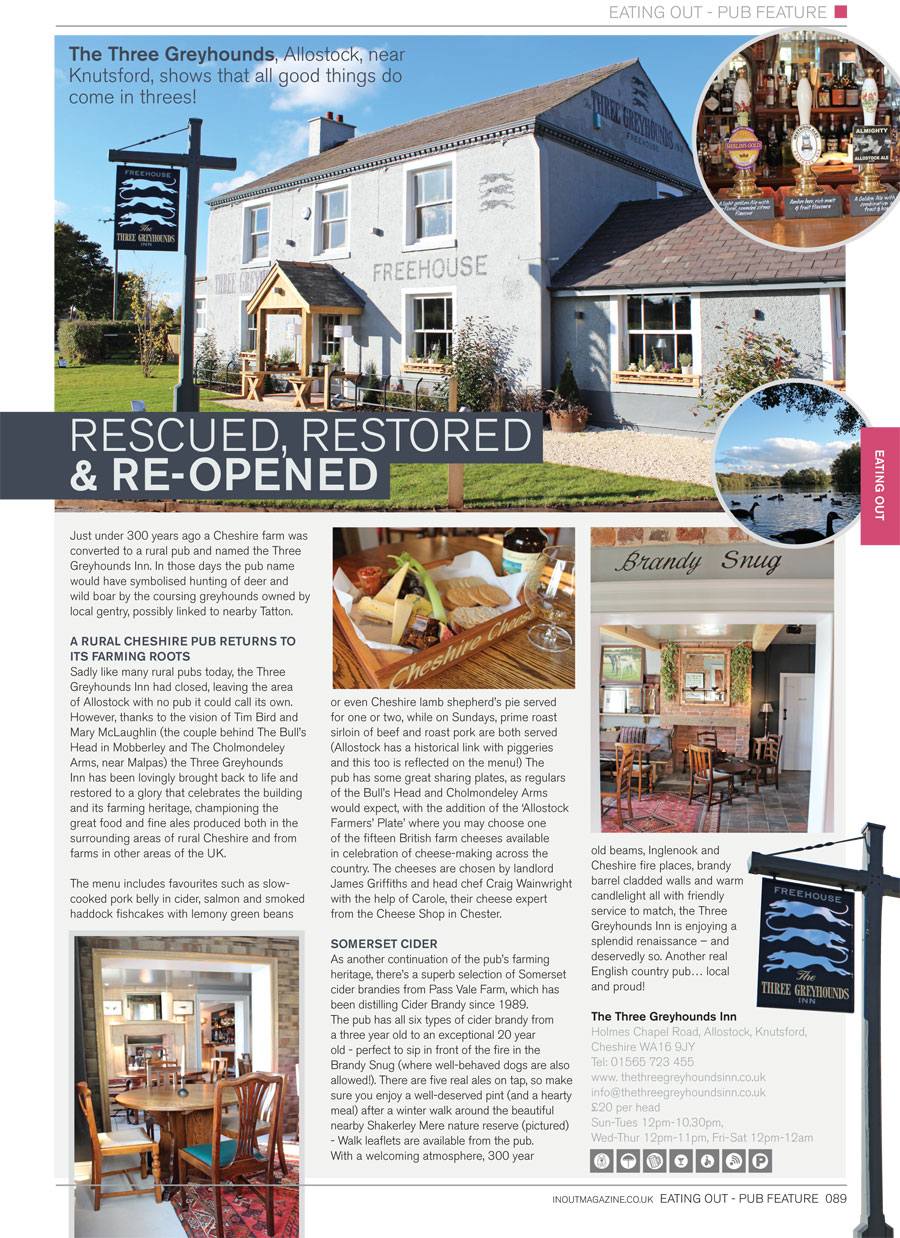